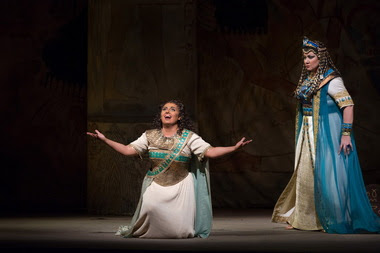 This broadcast of Aida was the second opera in the 6 years of simulcasts from the Metropolitan Opera that is a repeat of the same production with a new cast.  The other one was Lucia. 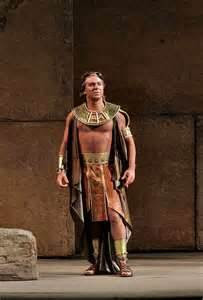 Renée Fleming was back as host.  She interviewed the horses who were very well behaved.  She gave them each a treat.  Their trainer explained how to select and train horses for the opera.  Apparently they recognize their musical cue and get in character.

Roberto Alagna was Radames.  I prefer him to Botha, probably because he looks heroic in his costumes.  This was the role he was booed off the stage for at La Scala 6 years ago.  This time around he took the high note sotto voce.  Perhaps it is time to forget the incident at La Scala.  Pardonez-moi. I admit, though, there was some grousing in my audience.  For some reason I always enjoy Roberto.

Amneris was sung by Olga Borodina.  I enjoyed her very much in this role.  She sings to the legato rather than to the rhythm.  She isn't nearly so sinister as Zajick.

Liudmyla Monastyrska was our Aida.  She sings big, but not so heavy as Violetta Urmana.  She is a new star on the scene, and has only recently been heard outside her native Ukraine.  This means that her voice and technique grew to maturity before she began an international career.  I am ignoring the secondary cast.

The best thing about this outing was the direction for television.  This set is imposing and magnificent, but that effect only rarely comes off in filming.  This version was excellent.
Posted by Dr.B at 6:39 PM

Compare the booing for Alagna with the booing for Cecilia. Alagna's is serious booing while Cecilia's is much milder. Hearing it again, I think it is his wide vibrato they are booing.

Alagna should retire. BTW, I thought his high notes were falsetto, not merely "sotto voce." He still has no clue when it comes to intonation, oftentimes sharp and even a bit shrill. I seemed to me he had some problems keeping time with Luisi's conducting, or maybe it was the other way around.

The rest of the cast was terrific, and Gagnidze as Amonasro was spectacular -- great voice, excellent stage presence.

The light high notes are, of course, the same ones that generated the booing. He's probably doing it on purpose. He explained this in his interview. Met audiences wouldn't boo anyway.