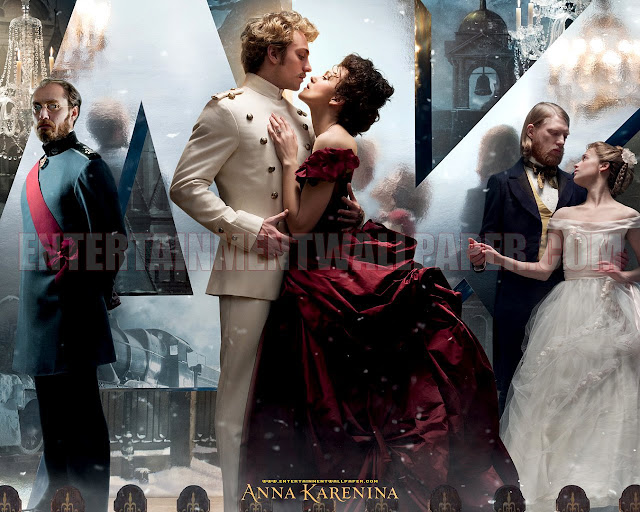 I went to see the new movie Anna Karenina starring Keira Knightley as Anna, Jude Law as Karenin, and Aaron Taylor-Johnson as the beautiful Count Vronsky.  The acting is outstanding.

If you go to the opera, this movie will seem pretty normal to you.  If you don't, well what can I say.  Much of the filming takes place inside an old theater.  Remind you of anything?  Like last summer's Atilla where each act was in a different falling down theater.  At least in the movie there wasn't another movie playing in the background.  And the Met's The Tempest was similarly staged inside of a theater instead of on an island.

The back of the theater would open and suddenly you would be outdoors somewhere, always a different place each time.  Like the end of Giulio Cesare in Salzburg.

There is some pretty peculiar looking waltzing, trains and horse racing that ran through the theater.  I haven't seen horse racing in an opera.  Yet.  I read somewhere that many of the images were from paintings.  I felt right at home.

Can't wait to watch this movie! I'm sure I'll like it as I've already read a lot about it. And I also think it has very beautiful music, at least everyime I think of Anna Karenina I imagine something from Beethoven playing...