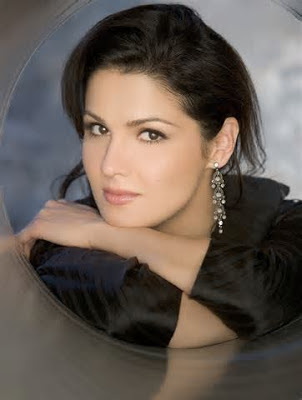 I read that Anna Netrebko has new roles in her future.

She will sing her first Tatiana in Eugene Onegin at the Vienna State Opera in April, to be followed by performances at the Met next fall.

She will sing her first ("and probably the last," she says) Wagner role, Elsa in Lohengrin, at the Semper Oper in Dresden, Germany.

She is scheduled for Marguerite in Gounod's Faust at the Festspielhaus in Baden-Baden in Spring of 2014.

No dates or places are attached to plans to sing Leonora in Il Trovatore and Lady Macbeth in Macbeth.  NOOOOOOOOOOOOOOOOOOOOO!!!  I think I shouted.  Well.  Maybe.  I was good with the other stuff.

And don't forget there was the earlier rumor that she would sing Manon Lescaut in Munich with Jonas Kaufmann.

Addendum.  Macbeth is from Munich a year from June.  Jonas will do Forza with Anja Harteros in Munich in the fall.
Posted by Dr.B at 10:08 PM

Well, there is a rumour ... Check this post: http://salazarfamilycircle.blogspot.com/2013/01/netrebk-vs-domingo-in-il-trovatore.html