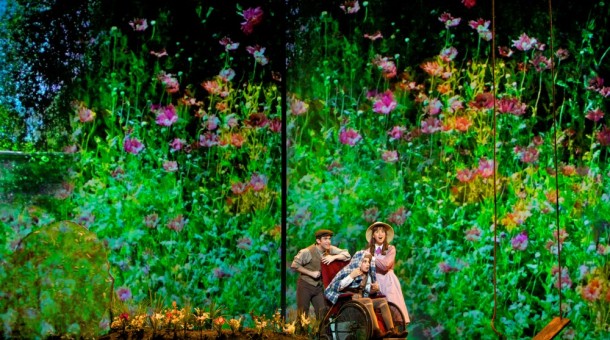 I was probably the only person in the audience for the opera The Secret Garden by Nolan Gasser at Zellerbach on Sunday that had never read the book or seen any of the other theatrical versions of the story from a 1910 novel by Frances Hodgson Burnett. I am acquainted with people who claim this as their favorite book.

It was orchestrated as a chamber music ensemble rather than an orchestra, rather like L'Histoire du Soldat.  Each instrument was made to stand out from its neighbors rather than blend in with them.  This was pleasing except when they covered the singers.  The singers were all good professionals with nothing particularly interesting to sing.  The cast was unusual only in the fact that it included a teenage boy in the role of Colin.  This never happens in opera.

I am not the person to evaluate this as a work for children.  It's too politically incorrect in far too many ways to please me, I'm afraid.  The story seemed to divide in half:  before intermission and after.  Before it is about a stubborn and independent girl who grew up in India and is suddenly thrown into a completely new environment.  After it is about a psychologically but not physically crippled boy who suddenly, miraculously becomes a man.  He sings about this ad nauseum.  Ho hum.  The girl practically disappears from the story.  Other people seemed to like this fine.

It looked wonderful.  I especially liked the films of an English robin.  It had very much a Candide ending.  Go outside, enjoy your garden.  I could take this advice.