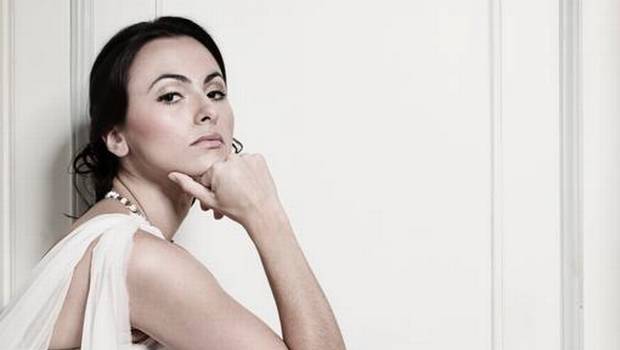 I always think someone must be listening.  I complain about things and then suddenly they change.  One of the things I complain about is the standard format of the academic vocal recital showing up in professional recitals.  You're not in school any more.  You get to sing what you like.

And so Isabel Leonard appearing on Sunday for San Francisco Performances sang what she liked.  She told us that since she is half Argentine and half American, she would do the first half in Spanish and the second in English.  It all seemed to be about love, happy and sad, and about motherhood.  She is a mama.

This is the half before the intermission.  If you spend a lot of time listening to singers like Victoria de los Angeles, Monserrat Caballe and Pilar Lorengar, you will have heard a few of them.

Isabel's style of performance also eschewed the academic.  For instance, there was a chair where occasionally she would sit.  Big gestures, big smiles.  She is a performer who is capable of disappearing into her roles.  Here, too.  She felt each song in her heart and soul.  I also smiled a lot.

In the second half, made up entirely of songs by American composers, there were a few songs I recognized.

Adam Guettel - How can I lose you
Richard Hageman - Do not go, my love*
Ned Rorem - What if some little pain
Cole Porter - Where, Oh Where [What?  A Cole Porter song I've never heard before?]
Ben Moore - I want to go with the one that I love? (World Premiere)

For no reason I have put a little * next to the songs that were familiar to me.

In this part Isabel might even go and sit next to her pianist, the very sensitive Vlad Iftinca.  I will say it again.  Sing what you love.  It was a very warm-hearted and enjoyable recital, perhaps the most physical that I have been to.  She comes next season to the San Francisco Opera.