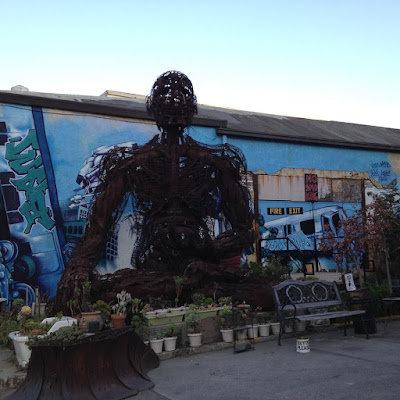 Monteverdi's Il ritorno d'Ulisse in patria was presented at the old American Steel Works in Oakland which has been converted into an artists' studio, represented by the giant Buddha sculpture above.  The opera was sung in Italian.  I believe it was cut down from the original length.  There is so much to write about I'd better get started.

In English the title means The return of Ulysses to his homeland.  Ulysses is also called Odysseus.  He spent 10 years in Troy where he most famously invented the Trojan Horse.  Then he spent another 10 years wandering throughout the Mediterranean.  These journeys home to Ithaca are called The Odyssey, and it is the very end of The Odyssey which is the subject of this opera.

There was a self-conscious effort to reproduce the original instrumentation for this work.  Apparently we now know exactly who played because in Venice there are payment records for the musicians.  The performance used two violins, two violas, a viola da gamba, an Italian Baroque harp, a theorbo, two harpsichords and something called a director. It has a small keyboard with two bellows extending out the back.  It creates an organ like wheezing sound which was used exclusively to accompany the god Neptune.  When it was time to play it, Penelope's handmaiden Melanto would come out and operate the bellows. 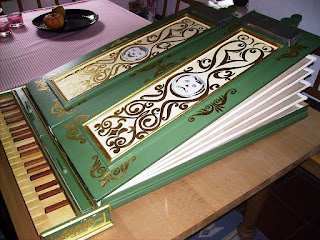 This is what it looked like without the decorations, but Wikipedia calls it a Regal.

I enjoyed very much the sound of this orchestra.

An unlisted character in the form of a lamb hand-puppet appeared, first carried by the goddess Minerva and then by Ulysses' sheepherder friend Eumete.  The puppet reminded me of Lambchop, so when Eumete came over by my seat and held him up to me, I asked if he was Shari Lewis.  He went a bit out of character.

Ulysses returns first to visit his old friend Eumete.  An unusual theatrical device used the goddess Minerva to bring continuity.  She appears in almost all the scenes except for the ones where the suitors get together to plot.   Kindra Scharich, a beautiful singer, was Minerva.

While Ulysses is visiting with Eumete, Minerva brings his son Telemaco to meet his father riding on a red and white Vespa.  This was a highlight.

In the end Ulysses kills all the suitors and his wife takes him back.

Monteverdi operas sound like nothing else in the world.  The ethereal effect is quite striking and moving.