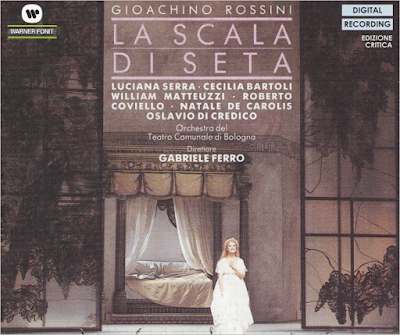 I decided to watch my DVD of Rossini's La Scala di Seta which I bought years ago from House of Opera.  I bought it because it featured a young Cecilia Bartoli (she is 22) singing in Bologna.  I think I put off watching it because there were no subtitles, and it's very wordy.  The sound is good, but the picture is blurry.

The music is charming but contains no surprises.  Rossini was only 20 when he wrote this.  In my list of Rossini operas this is the earliest.

The staging is astonishingly formal.  They stand in formation like something from the eighteenth century.  The versions on YouTube are staged in a much more modern way.  There is a bed which they get on every once in a while.

Cecilia is herself.  Despite the formality, when her beau expresses an interest in her, she drags him behind the screen and starts pulling his clothes off.  The guardian throws her onto the floor.  She rolls her R's as one expects. The main soprano is Luciana Serra.

There is no explanation for the plot.  A young woman lives with a guardian who wants her to marry his favorite.  Meanwhile she is already married to someone else whom she lets in and out of her bedroom using a silk ladder.  Why not just tell the guardian his services are no longer required?  This is too modern a perspective, I suppose.

The audience likes everything.