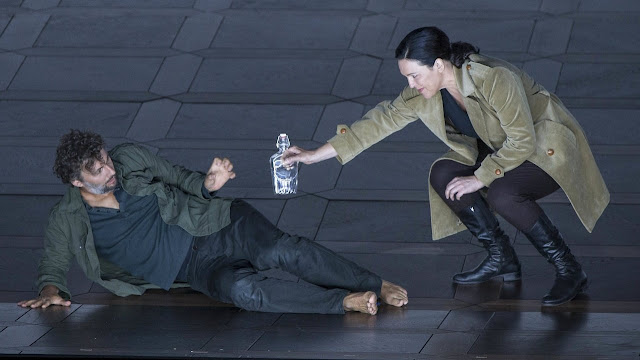 I watched the live stream of Fidelio from the Salzburg Festival today.  Perhaps it's best to talk about the music first.   Jonas Kaufmann as Florestan and Adrianne Pieczonka as Leonore were great, perfectly cast in their roles.  Hans-Peter König was familiar for his Hunding in the Met Ring, and Tomasz Konieczny was previously seen as Jack Rance in Girl of the Golden West.  I liked this cast very much.  This was probably the most beautiful canon quartet I have heard.

Leonore #3 overture was played between the two scenes of the second act.  It was probably necessary to accommodate the set change.  The orchestra received the biggest applause of the performance here.  This is the most I have liked Franz Welser-Möst.

The production.  All the spoken dialog was left out.  Where the dialog would have gone were extended periods of strange sounds:  wind, people breathing, the heart monitor going to the death sound, etc.  This had the effect of making the whole thing much more serious.  I didn't mind this.  I missed "Ich habe Mut und Kraft."  But that's about it.  But if you truly love Fidelio, you don't want it changed.

There were two acting only characters:  Paul Lorenger (Shadow Pizarro) and Nadia Kichler (Fantôme de Léonore).  The Fantôme de Léonore seemed to be one of those people who mime the dialog for the deaf.  I don't know enough sign language to tell if this is true.  Perhaps that's where the dialog went.

Florestan seems to have been driven mad by his imprisonment.  Loud noises and Leonore frighten him.  He collapses at the end.  Perhaps he has died.  He needs to be taken somewhere quiet to help recover from his PTSD.  In the picture above Leonore thinks perhaps he needs a drink.

I think this production suggests that Fidelio might be successfully presented as a more serious opera, but I reject absolutely that it should have an unhappy ending.  "Die Liebe wird's erreichen. [Love will make it happen.]"  This is what it's about.
#ad