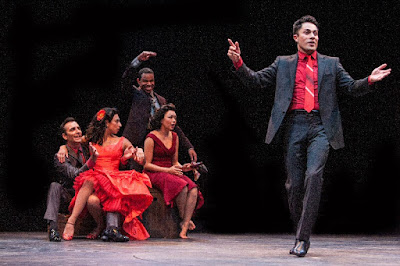 Last week I went to the Music Circus to see Leonard Bernstein's West Side Story.  I only remember seeing the movie before.  It's another show with lots of dancing.  The director and choreographer was Jerome Robbins.

Everything is very heavily miked which I'm not used to.  There are no supertitles, and since it's theater in the round, they are frequently facing away from you.  The pace is frantic and intense which I think people who enjoy musicals like.  St. Louis does opera in the round but with supertitles.

I was discussing this with my neighbor who said she saw it with a friend that is Puerto Rican.  Her friend complained about the clothing and the accents.  Puerto Ricans don't actually wear red and black all the time.

I feel it is important to explain this.  Theater and reality are two widely different things.  In real life people just wear what they wear and look the way they look.  If you are old enough to have lived in New York at the time--it premiered in 1957--you might know what people looked like in that time and place.  I vaguely recall button down collars, petticoats.  The purpose for putting them in consistently colored clothing isn't to accurately portray them--it is to clearly differentiate them from the New York kids in the rival gang who wore oddly pastel clothes.  When I go to a show, I don't like to be spending my time trying to figure out who each person is.  That's what the production is for.

The way the production looks is how the story is told.  One group runs quickly off the stage and is replaced by another.  "Who are these people?" is a question that should be instantly answered.  I always remember the Aida in Rome where the principals and the chorus all wore similarly designed outfits.  Which one is Radames?  Constant puzzlement is not a desirable quality in a production.

A theater production isn't trying to be a movie, although the use of films as background is increasing.