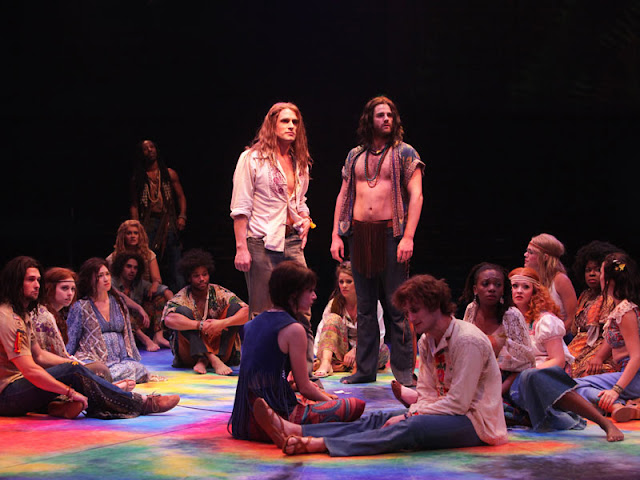 Last night I put on my dashiki and my wrist bands and set out to see Hair (also called Hair: The American Tribal Love-Rock Musical) at the Sacramento Music Circus.

And now I'm confused.  I remember this, of course.  But I didn't remember that it debuted on Broadway in April, 1968, before the so-called summer of love which I think I thought it was about.  They do talk about LBJ as the president.

This is time travel.  I had a 3 year old child then and was amazingly unhippy-like.  Nevertheless they are are my friends.  Why doesn't anyone protest war any more?  They made that clear:  the draft.  If someone can force you to leave your life and go off to fight in a meaningless war, it seems to focus your attention.

One of their tribe is caught by the draft.  He comes back in his uniform with his hair cut short, and no one recognizes him.  At the end he dies.

For me they successfully recreated the time and spirit of the anti war movement.  Where have they all gone?  Only the constant swearing remains behind.  My only complaint is that the sound was so loud that I was forced to use ear plugs.

I sang along with "Let the sun shine."