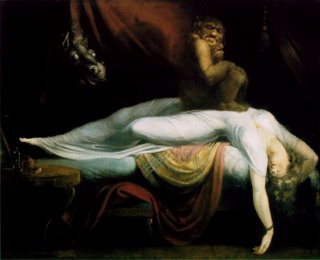 There is an art exhibit at the Tate Britain now called "Gothic Nightmares". The main painters are Henry Fuseli and William Blake, and the theme painting is Fuseli's "The Nightmare" picturing a beautiful blond woman dressed in a white nightgown and lying in the dead Desdemona pose with her head and arm dangling off the side of the bed. When she wakes up, she will have a terrible kink in her neck. It is definitely not Desdemona because she has a large gargoyle sitting on her chest.

This school combines Romantic beauty with the grotesque, and according to the exhibit was by far the most popular style of art of its period, from c. 1770 - c. 1820. Satan is a prominent figure, shown always as extremely beautiful, often nude.

I couldn't help thinking this is obviously the artistic context for Goethe's Faust (1808). The grotesquely beautiful Satan, the violated innocence of Gretchen, the witches sabbath, all of it is there. Why have I never seen a production of Faust as William Blake?
Posted by Dr.B at 12:32 PM