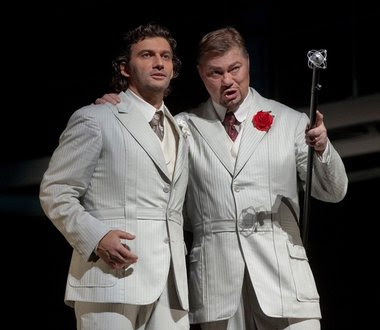 Today in Faust Live from the Metropolitan Opera in HD we had the privilege of hearing loud boos from the audience for the production designer Des McAnuff.  The production is a bit Eurotrashy, but after the bizarre production in Santa Fe--Marguerite on roller-skates--it didn't really seem too boo worthy.  One of the advantages of being in the house over being in a movie theater is that one can participate in the post production audience antics.  I "bravo" at the movies, but it does seem a bit silly.

Faust in this production is an aging bomb maker between the two world wars.  The current trend is to explain the opera as a dream or hallucination between the poison and dying.  Faust flashes back to his own youth, and the costumes change.  Faust and Mephistopheles always dress alike.  Perhaps Satan is his alter ego. The sets are spare, abstract and gray.

The goal is to cast the sincerity of the medieval religious fable into the cynical frame of the present.  The sincerity of the music plays against this cynicism.  I was prepared for the production to be confusing, but I did not find this to be the case. 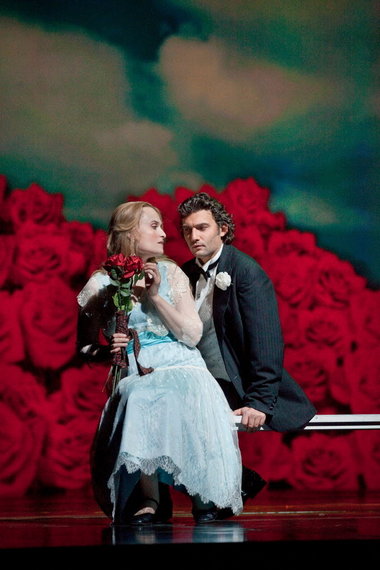 In case there was any doubt about who the opera is really about, our Marguerite Marina Poplavskaya's face was projected on the curtain for extended periods throughout the opera.  These were films.  Her facial expression would change gradually, but she never blinked.  When Faust is still in his laboratory, Marina enters and sits down at one of the work stations.  He is hallucinating about a real woman.  I enjoyed her performance, but her expression in the Jewel Song was rather textbook for my taste.  In her interview with Joyce DiDonato she worked on her sewing the entire time.  Perhaps she has never sewn anything before.

As an old man, Jonas Kaufmann's hair will apparently go straight.  His problem in this role is that it is hard to think of him as a cad.  He was irresistible.  That is the idea, isn't it?

Musically this Faust was somewhere between the extremely somber San Francisco Opera version and the really quite gay Santa Fe Opera version.  (Remember I am an old woman who has lived in a time when "gay" had a variety of meanings.)

René Pape was explaining to the very elegantly dressed Joyce DiDonato that he had no desire to be a tenor.  Why, in fact, would he wish to be anyone but René Pape?  He was simply awe inspiring.  In his interview he greeted his mother who was supposed to be watching from a movie theater in Nuremberg, not too far north in Bavaria from Munich where Jonas is from.

I enjoyed the calming effect of the modern context.  I cried anyway.