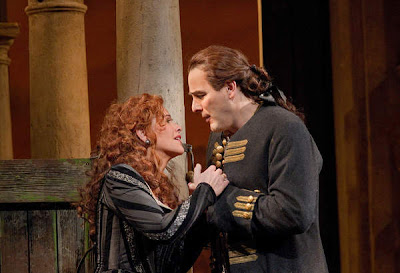 Today we were treated to Handel's Rodelinda live from the Metropolitan Opera.  It is an excellent opera.  One of the hard parts of creating opera is finding a good libretto.  In the Baroque and Classical periods this was much simpler:  you just stole it from an existing opera.  So Handel has stolen an excellent libretto, and even without any hit tunes, has created an excellent opera.  In its original production it starred Cuzzoni and Senisino.  You would be hard pressed to beat that.

Renée Fleming, our wonderful title singer, says it is her youngest daughter's favorite opera, because it is about family.  It's about royalty, until the verismo serious opera is always about royalty, but it's also about a child who is treasured by his parents, and parents who love each other and who work very hard to bring their family back together.  The required happy ending is truly joyful this time.

The direction, by Stephen Wadsworth, was practically miraculous.  The movement from aria to aria and scene to scene was very smooth, and the singing actors well understood their roles.  The non-singing child who begins the opera in bed with his mother was very fine in his role.

Few countertenors are as revered as Andreas Scholl who played the Senisino role, Bertarido.  Senisino was a contralto, and a uniquely expressive singer.  Scholl goes very deeply into the emotions of his character and is especially beautiful in his duet with Fleming toward the end.  And who knew he was such a clown?  Deborah Voigt asked him what made him decide to be a countertenor, and he answered in a very high voice.  :-)  Then he remarked that he had originally been a counter-terrorist and the transition to countertenor had been easy.

Stephanie Blythe impressed.  She runs counter to every trend and succeeds magnificently in spite of this.

Joseph Kaiser, Lestyn Davies and Shenyang complete the cast.  The conductor was Harry Bicket.  He conducted from the harpsichord.  I explained to my seatmates that at the original production that would have been Handel sitting at the harpsichord.

Of the eight Handel operas I have seen staged since I started this blog I think I liked this one the best.  Bravi tutti.
#ad