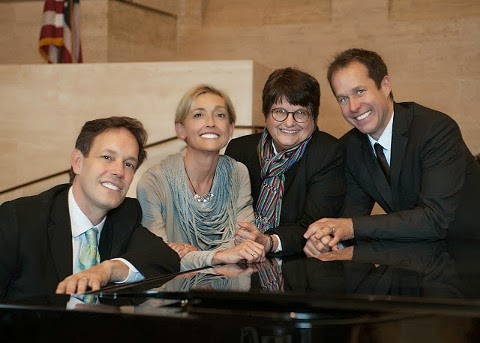 Opera Parallèle has produced Jake Heggie's Dead Man Walking.  The cast for this opera is huge, especially for a chamber opera company such as this one.  I have tried to reduce the list to the essentials.

The main characters are Sister Helen and Joseph De Rocher.  Such a rough looking man with tattoos in the title role creates an atmosphere of terror that I don't remember in the original production.  This casting is inspired.

The second tier of characters, determined by the importance of their music, are Sister Rose and Mrs. De Rocher, both cast by wonderful singers.  You will look in vain for the evil in Joe's mother that could have created this monster.  Even when he confesses at the end, he blames everything on booze and drugs, but retains the fiction with his mother that he did nothing.

The production first shows us the two teenagers first undressing and going into the water, followed by Joe killing the boy, raping the girl and killing her because she was screaming.  Then we are constantly reminded throughout the opera of why we are here by the presence of these two young people in virtually every scene.  They are present in Sister Helen's dreams, in court, in jail and finally in the execution chamber.

The sister is thinking of his soul.  The thought for us the audience is that God loves him, too.  If he admits he did it, perhaps God will save him, too. The constant reminder of the murdered teenagers blunts the anti-capital punishment message, to the point where you are not at all sure what the lesson is that one is to take away from this.

The opera is very successful both musically and theatrically, especially in this production.  It moves us to reconsider everything.

I shook hands with Jake Heggie in the intermission.  I have witnesses.  I sat in the second row and had really only one complaint--sitting so close to the orchestra resulted in ear pain, something that at my age I try very hard to avoid.  In the future we will phone in our ticket requests.

There was actual smoking on the stage which sent the woman sitting next to me into a coughing fit.

woman sitting next to Margaret--M&I are your witnesses along with Delma, yes?--got ear plugs from the YBC first aid station at the intermission....24 hours after downbeat, I'm still shaking (still shaking from the bit of rehearsal we saw a week ago, for that matter).